The main area of Lowland Heather is situated at the Eastern end of the Heath. More patches are spreading towards the bridleway. These are increasing thanks to the efforts of Tracey Lloyd, one of our dedicated volunteers. The plateau area overlooking the cemetery was seeded in December 2009 with local seed and eventually germinated in the summer of 2014. This area had good patches of heather in the late 1950’s, but had been scrubbed over mainly with Silver Birch. Small patches are still evident on south-facing aspects. 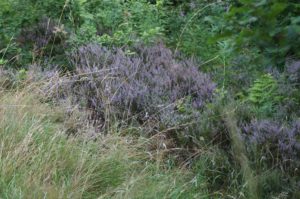