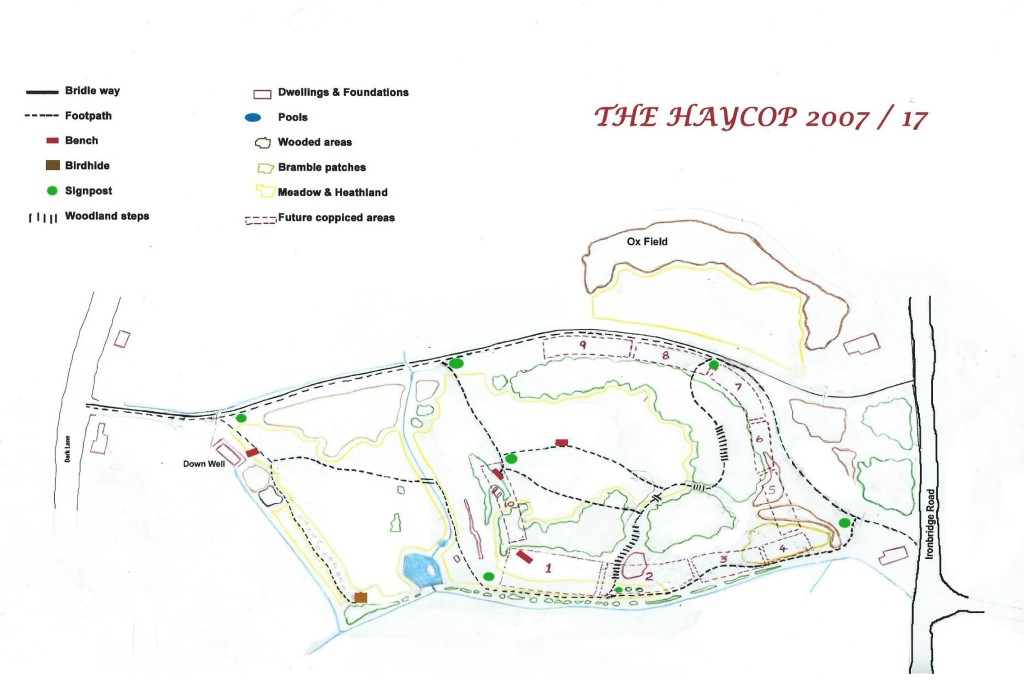 The main entrance of The Haycop is accessed off Dark Lane down a track between two detached houses (as shown on the map on the contact page), where limited parking is available on gravel near the site railings. Please avoid parking on the bridleway which runs down the right hand side of the nature reserve.

As you enter the nature reserve through an iron kissing gate, you will see the Down Well immediately to your right. In 1881, a shaft was sunk here to a depth of 90ft (27.43m); water quickly rose up to 49ft (14.93m). The Broseley Local District Board then agreed to buy the site for a sum of £10. The double brick tank, with its three inner chambers holding 30,000 gallons of water, was then built and completed in 1885 at a cost of £300. In the early 19th Century, the water situation in Broseley got precarious that a bucket of water from Much Wenlock was deemed a handsome gift from one person to another. It is said that a lady used to walk up to the Down Well every day to fetch pails of water to sell by the bucket on Broseley Square. The Down Well was Broseley’s main water supply for many years and was the only source of water in the exceptionally cold winter of 1947.

If you take the steps down towards the pools, you will pass the flower meadow on your right. This was seeded in 2008 with native wild flowers and grasses to enhance the habitats of pollinators, e.g.: bees, butterflies and various other insects. Ant mounds, home to yellow meadow ants and black ants, are in evidence here as well as on the heathland. These provide food for numerous creatures, for example: woodpeckers, badgers, slow worms, etc.

The Haycop Pool (formerly known as the Engine or Holding Pool)

The reinstatement of the pool was carried out in 2007 by Lee Owen. The area was cleared and dug out to solid clay following the site of the original pool. The natural stream supplying the pool had to be diverted temporarily. A smaller pool was excavated  further upstream to trap silt. The water source flows from rock strata below the Birch Meadow opposite The Haycop. It also feeds the Down Well . Within 3 months of the pools’s rebirth, reports were already showing signs of life, and a very high oxygen content in the water. A survey in May 2008, carried out by Dr. David Bradley (freshwater ecologist), recorded fresh water shrimp, pea mussels and New Zealand mud snails. A later survey, in September, recorded many aquatic plants and additional invertebrates. To quote Dr. Bradley, ” Considering the relatively short life of the pool, the diversity is astonishing”.

A purpose-built jetty, erected by Phil Harding, stretches out into the larger pool with the aim that the public and schools can go pond dipping.  An island was constructed in the middle of this pool as a safe haven for nesting birds, which has so far been occupied by both mallards and moor-hens.

Despite The Haycop being a deep coal mining area, there are several veteran oaks on site, one of which can be seen on photographs taken in 1901. The most numerous trees are Silver Birch, of various ages including saplings. There are three species of Willow, found mostly around the stream banks and pool areas. Hawthorne is common along with Holly – the latter was coppiced in 2007 to improved the understory. The Eastern end of the site has a number of Aspen trees, many of which are found along the woodland path. Ash was also coppiced but is still well represented. The only Evergreens are Yew and Laurel. In the last 7 years, various species have been planted to create a hedge line – mainly Cherry, Privet, Hawthorne and Field Maple. A future project includes the addition of Witch Elm to increase diversity.

The main patch of heath has now been cleared of saplings and most of the bramble. Birds-foot-trefoil is plentiful at the edges and common sorrel is also present. There are now at least 4 man-made habitats in various places providing homes for slow worms, common lizards and black ants. The heath is hand cut annually by local volunteers.  Species such as: Burnett, Mother Shipton, and Burnett Companion moths; and Dingy Skipper, Small Copper and Common Blue butterflies are now on the increase.

The Ox Field (out of bounds to the general public) is an additional 2.2 acre piece of land  at the Eastern side of The Haycop, adjacent to the bridleway. It is used for occasional light grazing and research.