The Haycop is a long mound running from the Ironbridge Road at Coneybury to the Down Well on Dark Lane, Broseley.

The Haycop was mentioned as early as the 15th century, taking its name from the enclosed piece (hay) of rough coppice (cop) – it was recorded as a gradual inclined field.

Coal was extracted from the Haycop as early as 1760. From 1780 coal was taken for coking at the Coneybury Blast Furnaces, and later to John Onions Broseley Furnaces at the Dunge. By 1838 it appears that Haycop coal was being used to fire the bricks at Onion’s new venture – The Broseley Tileries. In the 1850’s the mine was gradually run down and abandoned by about 1860. Although the weighing machine near the Down Well continued to be used until at least 1890.

Close to the Engine feed pool or ‘Holding Pool’, brick and stone foundations of the winding drum pit still remain. The Holding Pool has now been restored as part of the conservation programme.

Following closure of the mine the shafts became the town dump until well into the 1940’s. Waste pottery was also fly tipped here from Benthall and Ironbridge Pottery Company’s Factory. The shafts were capped in the 1970’s.

Broseleys water shortage in the 1800s led to the Broseley local district board establishing a new water supply. In 1881 a shaft was sunk on the haycop within the natural rock fault, water was found and tested for purity. On the 4th March 1885 a meeting of the Broseley local district board was held where the land owner General Jenkins agreed to sell the site to the board for the sum of ten pounds.

Work started on the construction of the well which can be found at the Dark Lane end of the Haycop today, having now been fully restored. 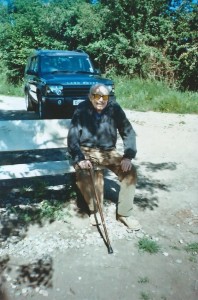 Since the 1920s the Haycop has been in the ownership of the late Mr Deryck Roberts of Coneybury farm, who used the area for light grazing until 2000. Prior to this time Mr Roberts Great Grandfather grazed pit ponies here in the 1800s. Mr Roberts was approached in 2007, with a view to allowing the conservation and restoration of the site. A committee was formed and over the last few years the Haycop has been transformed into a diverse nature reserve. 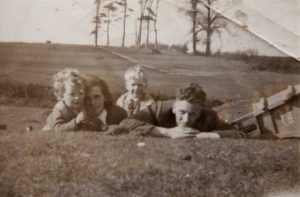 The Haycop’s first volunteer.  James Hurdley and family in 1946, photo taken from the top of the South Bank, looking towards the bridal way, with the ‘Trafalgar Fir Trees’ in the background.