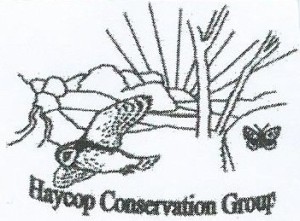 The Haycop Conservation Group is a charity aiming to restore the Haycop back to its 1950s former glory, where wildlife flourished, fresh water flowed and butterflies flew in abundance.

Nestling between Broseley and the Ironbridge Gorge, it is a real wildlife haven and well worth a visit. Sensitively restored by the Haycop Conservation Group after years of being overgrown, the landowner gave permission in 2007 for conservation management to proceed under the guidance of local naturalist Adrian Miles.

Fifty-eight species of birds have been recorded here. Common woodland species you might expect, for example: Jay, Sparrowhawk, Buzzard, Nuthatch, Great Tits, Blue Tits and Jackdaw are all here. Chiffchaffs are plentiful, as are Blackcap. A Garden Warbler is heard in song most summers, Swallows and Whitethroats too. Treecreepers frequent the shady Oaks in the woodland edge and both Great Spotted and Green Woodpeckers are a common sight and sound. Small passerines such as Goldcrest and Long-tailed Tits are regular species too. Flocks of Goldfinches and Redwings overhead will delight visitors on a winter’s day.

Of particular importance is the broad diversity of Lepidoptera. The small copper butterfly is abundant and, in the autumn of 2010, 33 third brood were recorded. Dingy Skipper is one such species of national conservation importance to be found at the Haycop. It has been a good site in the past for this localised butterfly. The organisation Butterfly Conservation have shown quite an interest, participating in work on habitat improvement for Dingys and Common Blue. Comma and Peacock Butterflies and Burnet Moths are also plentiful here.

On the pond, Emperor, Chaser and Ruddy Darter Dragonflies can be seen flitting about the marginal vegetation on sunny July days. Look for Palmate Newts too.

Since management of the site began, Badgers and foxes have returned. Reptiles such as Slow Worm and Common Lizard can now be observed on the South-facing bank and ant mounds.

So the Haycop certainly supports a good diversity of flora and fauna. The restored area has already see huge benefits to the local community, engaging nature lovers and many others through fund raising events, school visits and open days. It has also supported rehabilitation of youth offenders.